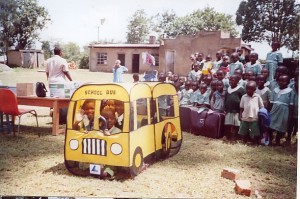 If managers would call their own customer services lines and have to wait forever,trapped in “voice mail jail” those truly committed to serve their market will make changes.

Not long after Tim became CEO of a major school bus manufacturer,he asked many of their customers what they should improve about the school buses that they constructed.Some school buses drivers from rural areas told him they didn’t like their buses because they had dust problem.When Tim asked what that meant,they described how,on unpaved roads,a great deal of dust would enter the interior.

Tim returned his office and called in his engineers.They responded ,”No way.We build them to specifications that wouldn’t allow that.”

Rather than argue,Tim took a couple of the engineers,traveled to a small town in Indiana,got on a bus ,and rode an after-school route.On a hot day with kids packed in the bus,the vehicle started to fill with dust.The engineers-used to their air-conditioned offices where they only saw the buses on the asphalt pavement of the plant-now had to endure the customer” experience.

“Guys,”Tim asked them as they bounced along the unpaved road,”would you put up with this every day?” They looked down and shock their heads.”Then our customers shouldn’t have to either.”The engineers went to work to solve the problem…