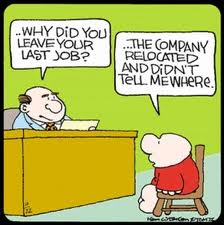 So, your resume has gotten you a job interview; it's the first big step toward the job you want. When your interview begins, however, job skills become secondary. You're now being interviewed largely on the kind of person you are. Your resume tells people who you are, but your manners -- good or bad -- show them.

the "e" word
Don't panic over the "E" word. Etiquette is nothing more than the grand set of all good manners. Put simply, etiquette is a language used to relate your respect and consideration to others. For the sake of this article, the "others" are the interviewers of the world, the ones who typically matter no more (or less) than anyone else in our lives, until one day when, instantly, their opinion of us matters most.

Therefore, the day of your interview is not the time to appear uncouth, disrespectful or inconsiderate by violating any of the following etiquette tips.

Be punctual
Like anyone at work, your interviewer is in the midst of a busy workday. Show them that their time is valuable to you -- after all, aren't they showing you that same respect with this chance to come in and present yourself off of the printed resume page?

Being late tells others that you're self-centered, disorganized, rude, or all three (qualities only sought after by the recruiters of reality television. So, unless you're seeking a spot on the next The Real World, leave home with plenty of time to account for delays otherwise beyond your control.

Dress accordingly
At an interview, proper etiquette dictates that your manner of dress should by and large fit in with the scene around you, but in a show of respect for the occasion, you should dress just a step above the norm of that environment. The reason is because inappropriate business attire -- in either direction, up or down -- creates an unacceptable distraction. When the focus should be on you and all your skills, your clothes shouldn't be stealing the show.

Take note of that handshake
A handshake is a physical interaction. At an interview, it's a physical interaction between strangers, making it a prime moment for etiquette. A firm handshake -- in which you pump the hand once or twice with a secure, steady grip, then release -- conveys affability and openness, and can create an immediate feeling of comfort between two people.

On the other hand, a meek, milky handshake or a flesh-grinding cinch can make a person uncomfortable. Before they have the chance to get to know you, you've already given them an unpleasant feeling. Making people comfortable around you is an essential aim of all etiquette. Think about it: Do you really want to make your interviewer uncomfortable?

During the job interview, countless moments will come up when etiquette is required. Getting them right gives you a confidence visible to your interviewer.

Enunciate, as well as animate, your language. An interviewer shouldn't have to ask you to repeat yourself, or wonder if they heard you right.

Look the interviewer in the eye. It's a trusting gesture to which people always respond positively. Anything else is simply rude.

Use engaging, non-threatening body language. Good posture alone can convey your interest in being there, while slouching conveys disrespect and indifference.

Use your interviewer's name, but in moderation. It proves you're involved and listening. It also helps establish rapport, which goes a long way in making for a successful interview.

Thank them "twice"
At the end of the interview, when you will invariably thank your interviewer, make sure to thank them both for their time as well as for your own opportunity. Much like arriving on time, thanking them in this way sends a message that you understand and appreciate the value of one's time.

Don't consider the interview completely over until, that evening, you have written a short thank you note. Keep it short. E-mail is acceptable but snail mail is preferred. Since this is a business communication, it shouldn't be handwritten. 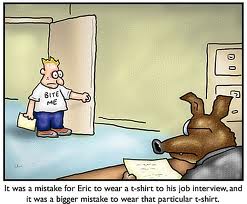 Don't get caught unprepared
Learning as much as you can about the company and about the position for which you're applying is a sign of respect. As simple as it sounds, don't forget that your interviewer works for this company; it's a big part of this person's life. Therefore, a modest but competent display of your commitment to this interview through prior research makes you look good while flattering them at the same time.

Don't disparage past employers
If you can't say something nice about someone, don't say anything. It's disrespectful to take shots at former employers and companies (in part because they're not around to defend themselves), and doing so can seem cheap and offensive to others.

Furthermore, the interview is about you and about this company, and how you fit together; don't leave your interviewer with descriptions of former bosses and coworkers who have nothing to do with it.

Don't lie -- about anything
For all the many reasons not to lie or to wildly embellish anything, remember that a gentleman / lady never lies. He doesn't need to.
the bottom line
In their many publications over the years, the Post family (they who man the Emily Post Institute of etiquette) have pointed out that, all told, good manners actually tend to go unnoticed. What's noticed is their result: a smooth and enjoyable social connection between people.

What's impossible to miss, however, is the lack of etiquette. In this case, you want to leave the interviewer thinking about how friendly, intelligent and engaging you are -- not how obnoxious you are, what a ridiculously painful handshake you give or what you were thinking when you put on your dirtiest jeans before leaving the house.