How to Improve Your PowerPoint Slides with the Rule of Thirds...

You can design attractive visuals by following simple guidelines.  One of these simple guidelines is the Rule of Thirds — a composition technique borrowed from photography and other visual arts that works wonderfully in PowerPoint.In this article, you will learn: 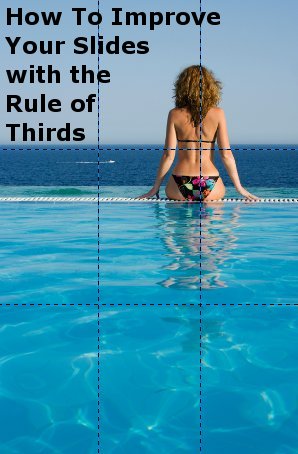 What is the Rule of Thirds?

The Rule of Thirds is a guideline for composition that suggests placing key graphic elements along lines which divide your image into thirds, or at the intersections of those lines.

What does that mean? I’m glad you asked.

Imagine your PowerPoint slide is divided both vertically and horizontally into thirds, like this:

PowerPoint Tip: You can use the guides feature to draw these four lines into your PowerPoint template. They will then appear on every slide to help you compose your slide.

How do Photographers Use the Rule of Thirds?

Rule #1 – Place Key Elements of Your Composition at Power Points

In this example, the key element is pretty obvious — the tree.

Rather than centering this element in the photograph, the artist has chosen to center it on over the top-left Power Point. 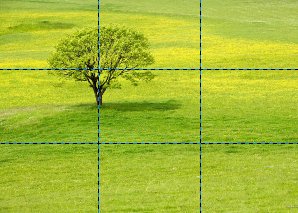 Rule #2 – Place Key Elements of Your Composition Along Horizontal Lines

Novice photographers are tempted to place the horizon in the middle of the frame. This is generally not the best approach.

In this example, the photograph has placed the horizon (and also the line formed by the tops of the horses) along the lower horizontal line. 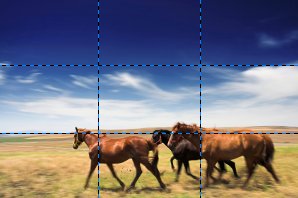 The overall effect is balance between the three horizontal bands of color from top to bottom: dark blue, white, and brown.

Rule #3 – Place Key Elements of Your Composition Along Vertical Lines

This isn’t a photograph, but the designer has (consciously or unconsciously) applied the rule of thirds. 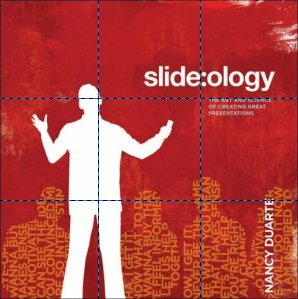 Here, the white silhouette of the presenter is bisected by the left vertical dividing line.

Appropriately, Duarte writes this in slide:ology about the Rule of Thirds:

Composing your photos based on a simple grid of thirds is a trick used by movie producers, graphic designers, and professional photographers. Using the rule of thirds leads to aesthetically pleasing and professional-looking imagery.

In this example, the upper horizontal line lies across the horizon, separating the sky in the upper third from the water in the lower two thirds.

Simultaneously, the woman in this photograph is placed on the upper-right Power Point. 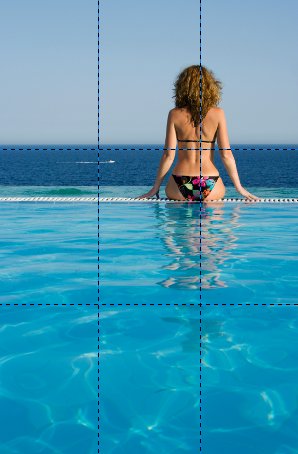 Furthermore, consider the line that is formed from the top of the woman’s head, down the middle of her back, and right through to the reflection on the water. Where is it? Centered on the right vertical dividing line.

So, this photograph blends elements on two of the four lines and one of the Power Points.

Does the Rule of Thirds Really Result in More Pleasing Compositions?

I was. So, I decided to perform a simple test with the audiences of a PowerPoint seminar that I have given several times.

My test photograph is a landscape photo shown in the upper left of the four images below.  By zooming this image slightly, and then moving it up and down on a slide, I created the three slides shown below (without the rule of thirds dividing lines that you see here, of course).

Each time I give this seminar, I ask the audience a simple question: “Which of the three slides is most pleasing to you?” 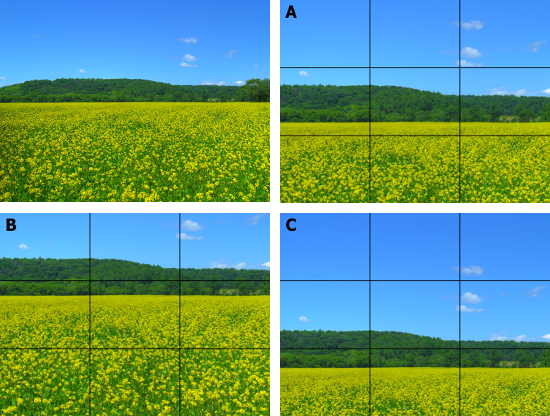 Less than 5% of audience members choose Slide A. Some say “It’s boring.” Others remark that “I couldn’t decide what was important in the photo.”

Slides B and C were chosen roughly half of the time. Audience members found one or the other (or both) to be “pleasing” and “interesting.” Is it a coincidence that both of these slides use the Rule of Three, while slide A did not?

How Can You Apply the Rule of Thirds to Your PowerPoint Slides?

The example below is the title slide from one of my presentations.  I used a stock photo which provides a visual metaphor for my topic (i.e. the blue piece stands out among all the yellow pieces). Since this photograph has a white background, I was able to place it off-center so that the blue piece landed on the upper-left Power Point. I then placed my slide text (in a matching color) centered on the lower horizontal line, anchored on the right vertical line.

Below are two more examples taken from my presentation design course.

On the left, I cropped a much larger photograph so that the stream of water falls along the right vertical line. Further, it hits the overflowing glass at exactly the lower horizontal line. Since the image background is out of focus, it provides good contrast for black text which I centered on the upper horizonal line.

Will Using the Rule of Thirds Take More Time?

When you first become conscious of it during slide design, it may take you longer to choose and lay out your slides. However, it will save time and improve your visuals in the long run.

You need to limit your choices so that you do not waste time adjusting every single design element to a new position. I recommend that you create some sort of clean, simple grid to build your visuals on. [...] Grids can save you time and ensure that your design elements fit more harmoniously on the display.

Join the next training as we explore more amazing tips..Here is the way..