How To: Speak In Public (Beginners Basics) 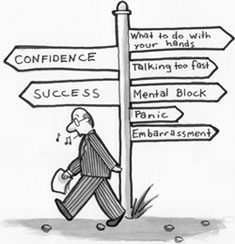 You think you have it made with your mid-level position; you rank above the bottom-feeders while avoiding heavy responsibilities. But do you think you're immune to public speaking? Think again; nobody can hide from that possibility.

What if your memo on incentivizing methodologies made waves in the higher echelons of your company and you were given an award for your ideas? What if you had to give the toast at your best friend's wedding? Worse still, how would you handle the eulogy at his funeral?

Public speaking is stressful for most people, so we are often judged on how we handle the situation. The best defense is preparation. If you get ready ahead of time, you'll avoid looking like a fool. Once you overcome your fear of public speaking, you can get started on learning the skills that will turn you into a gifted orator.

Write a speech
The worst thing you can do when speaking in public is to wing it. No matter how short your speech is supposed to be, you must prepare in advance. If you don't, stress and distractions might cause you to freeze or utter something that sounded better in your head.

Don't read
Writing a speech isn't enough; you must be able to speak without sounding like you've rehearsed. If you're afraid to forget key comments, bring notes and refer to them sparingly.

Know your topic
It can be embarrassing for everyone when the speaker doesn't have a clue what he's talking about. Research your material and double-check your facts so you appear knowledgeable.

Know the crowd
Boardroom stuffed shirts will react differently than a roomful of drunken coeds. By assessing the kind of crowd with which you'll be confronted, you can evaluate what you can and cannot say.

Surf the crowd
You should look at different people in the crowd rather than a single fixed point. If that makes you uncomfortable, look above their heads rather than directly at their faces.

Project your voice
Even if there's a microphone, you want to be sure the folks in the last row are able to hear you as though you were standing next to them. Don't shout; speak from the lungs.

Find your rhythm
You must find the proper speed in which to deliver your speech. If you go too fast, people will think you're in a hurry to leave their graceful company and they probably won't catch everything you say. If you go too slowly, you might hear snoring before it's over.

Now that you know the basics, fine-tune your skills for every situation.

Toast
A toast is the simplest version of public speaking. It merely involves offering a few words before letting the booze flow when you're celebrating an important or special event.

Consider the crowd
Toasts can be given at family gatherings and business celebrations, but they are especially popular at weddings. Again, you must adapt your material so as not to offend your crowd (or worse, the subject).

Defer to the host
The host gets first dibs on toasting. If you're not the host, wait until he has given his speech or has waived his right to do so.

Raise your glass and wow the crowd..

Stand up and politely ask the others to raise their glasses or announce that you'd like to toast the guest of honor. Do not signal your intention by beating a utensil against your glass. Face your subject and raise your glass while you speak. If you're giving a long speech, simply raise it at the end of your toast.

Praise your subject
Take a moment to refer to the person you're toasting and celebrate what he means to you. Your friend just got married? Let everyone know why he's your friend.

Use humor
Opening your toast with a joke is a good way to lighten up the atmosphere. Just make sure you're not being too racy; there's no need to be rude. It's also a good idea to relate an anecdote about your friend that shows a side of him not everyone is familiar with. Just don't embarrass him or his loved ones.

Be brief
Everyone's listening with their glasses raised; you don't want them to pay more attention to their tired arms than to your speech. Get right to the point without ranting aimlessly. Be short and sweet, then sit down.

Eulogy
This is an occasion for public speaking no one wishes for. The stakes are also much higher since it involves someone's passing and a celebration of his existence.

Summarize his life
The main theme of your speech should be the positive impact the deceased had while he was alive. Recount his life story, especially how he touched others, and the roles he played as parent, friend and business partner.

Use anecdotes
Don't be afraid to talk about a fishing trip you once took together. Simple stories that are easy to relate to often help the audience better understand the person's character.

Be natural
This is an instance of rhetoric that shouldn't sound rehearsed; the idea is to recall the good moments as if they were so plentiful that you can remember them on the fly. As well, remember that it's okay to appear emotional, but since this is a tribute to the deceased, try to breathe and maintain your composure.

Give a memorable acceptance speech..

Remember that is isn't about you
You're not the central character in this discourse. This is not about making yourself appear brave, smart or generous; it's a time for pride and bidding farewell to a loved one.

Acceptance speech
You may suffer from stage fright, but if you must give an acceptance speech, at least you'll receive a cool reward for getting up there and speaking.

Be gracious
Wow, you've been given an award. Hopefully, it's the Nobel Prize or an Academy Award. Take the time to thank the organization and people who are giving it to you. Praise them and the great work they do.

Be humble
You're not a god and nobody owed you this honor; be modest and grateful. You can be a little self-deprecating without going overboard; otherwise, those presenting you with the award could see you as unworthy after all.

Make sure the length is appropriate
When you discover that you've been nominated or that you'll receive an award, ask the powers that be how long your acceptance speech must be. This way, you can tailor your address so it includes just the right amount of information.

Prepare
If you have some words written in advance, the bestowing organization will realize that you take the award seriously and that it's truly an honor for you. You should study it before the ceremony so you appear natural and don't forget any important names.

Be prepared
Before that dreaded occasion comes along and forces you to display your oratory skills, you must remember that what makes a good speaker is confidence.

Confidence, in turn, stems from good groundwork. If you practice until you are self-assured, your speech will be entirely natural and the spectators will be active in their listening. You'll be regarded as a pro.