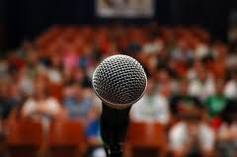 Former British Prime Minister Stanley Baldwin hated rhetoric (the art of public speaking) and blamed its overwhelming force and power for having spilled so much blood throughout history. He believed that “to tell the truth needed no art.”

That’s artfully put, but not only does a speaker have to want to tell the truth, an audience has to want to hear it. Simply put: Great speeches come across as passionate and authoritative voices of the truth; they never read like excerpts from the World Almanac. If they did, nobody would listen.

In achieving that authority, legendary speakers utilize a wide range of both rhetorical and oratorical traits. Some of those traits are inherent, but others are available to any public speaker who can put them to proper use, whether it be in a modest business presentation or an important professional speaking engagement. Here are a few of those lessons we can all take from some of the greatest orators in history.

Winston Churchill
“Let us therefore brace ourselves to our duties, and so bear ourselves that, if the British Empire and its Commonwealth last for a thousand years, men will still say, ‘This was their finest hour.’"

As Prime Minister of England during World War II, Churchill gave his most electrifying speeches over the radio. He spent weeks crafting them with a rhetorical precision that is virtually extinct today. His favorite tactic, which he relied on again and again, was to appeal to history. He contextualized his most important points and ideas with allusions or direct references to the past and to the future, giving his message an intoxicating and inspirational timelessness.

Lesson: Position your goals within a grand context
Few professional speaking engagements will lend themselves to contextualization on the level that Churchill did. Nonetheless, it can serve as a reminder to make certain you raise the stakes appropriately when you speak. The fate of our civilization doesn’t depend on your firm’s fourth-quarter results, but if jobs and livelihoods do, make the most of it in your speech.

Ronald Reagan
(Following the explosion of the Challenger space shuttle) “We will never forget them, nor the last time we saw them, this morning, as they prepared for the journey and waved goodbye and ‘slipped the surly bonds of earth’ to ‘touch the face of God.’”

Reagan earned the epithet “The Great Communicator” on the disarming efficacy of his tone. He drew listeners in and won them over with a homely, personable style of delivery that felt conversational but paternal, informal but authoritative, and always vigilant in its aims.

Lesson: Be affable, but have a backbone
To some extent, because it is a matter of tone, Reagan’s affable style is beyond the capacity to borrow or mimic. But abstractly, it becomes a matter of steady seduction, of employing a more relaxed tone to snap out of the stiffness of a prepared text.

One very simple way to achieve this is to first write your speech as you normally would. Since what we write in preparation can often be at odds with how it will actually sound, practice it extensively, but without fear of wandering from the written material. As your familiarity grows, your tone should relax into something more conversational while your actual grasp of the material -- and consequently your authority in delivering it -- tightens up.

Martin Luther King, Jr.
“ … we are not satisfied, and we will not be satisfied until justice rolls down like waters, and righteousness like a mighty stream.”

Whether he spoke from a pulpit or a podium, King sermonized and mesmerized, infusing even the most mundane words with a seemingly spiritual origin. Yet he also used easily recognized allusions to well-known sources to brilliant effect; by attaching his new and radical ideas to old and well-established ones, he gave them an unimpeachable prestige and authority.

Lesson: Align your words with a tradition
Sermonizing like a Baptist preacher or alluding to the Old Testament may not go over well in a PowerPoint presentation, but making appropriate allusions to past successes or visionary goals can work to convince your audience of both your credibility and of the feasibility of your aims.

Roosevelt’s 12 years in the Oval Office coincided with some of the country’s most tumultuous times, thus affording him more than a few occasions for great speeches. The best-known of these was the so-called “Infamy Speech,” delivered the day after the Japanese attack on Pearl Harbor. Utilizing the active and passive voices of verbs, he portrayed Japan as an unprovoked aggressor that attacked the passive, innocent and peace-loving people of the United States.

Lesson: Structure your phrasing strategically
There are literally hundreds of rhetorical devices at your disposal, and voicing your verbs properly is one of the easiest ones to apply this tip. It’s also one of the easiest to neglect, especially if you don’t do much formal writing. The passive voice weighs down most trade manuals and tech books; many seem convinced that it sounds more professional, but this is the sound of detachment and laziness. Check your speeches for “was” and “has,” then try repositioning the words so that your meaning hasn’t changed but the verb is now active (e.g. “doing” versus “done”).

John F. Kennedy
“ … let us go forth to lead the land we love, asking His blessing and His help, but knowing that here on Earth God’s work must truly be our own.”
Kennedy was a good public speaker but his speeches are remembered largely for their memorable content. In 1960, he debated Richard Nixon in the first presidential debates ever broadcast on television. According to legend, if you heard them on the radio, you thought Richard Nixon won. If you watched them on TV, you thought Kennedy won, in part because Nixon looked pale and sickly, while Kennedy looked sharp.

Lesson: Don't neglect self-presentation
Your audience shouldn’t be asking themselves why you couldn’t bother to comb your hair, whether you even appear healthy enough to make it through your speech or even why you had to wear the flashiest outfit you own. How you present yourself should quietly impress them, although it shouldn’t overshadow you or the points you’re trying to make.

say it like you mean it
Momentous occasions and turbulent times have generally proven the most fertile soil for good speakers to become legendary ones. Yet, even if your reason for public speaking is less than consequential, you can make it far more memorable if you take a page from the playbooks of legends.